Learn more about the OnePlus 6 as a business smartphone. Includes user reviews, features, pricing, and answers to common questions.

The OnePlus 6T is one of the best smartphones for business. It offers fast performance and low power consumption, a user-friendly design, and the Oxygen Operating System creates a seamless software experience.

The OnePlus 6T costs between $499.00 and $619.00, but certain carriers may have special offers with contracts. 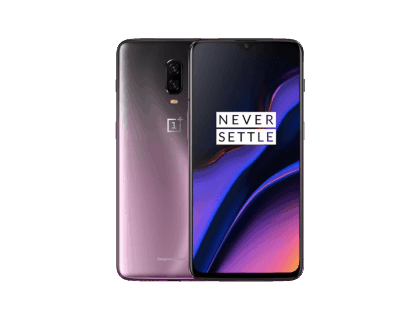 Pros: Has one of the fastest in-display fingerprint sensors and the battery charges quickly.

Cons: Does not charge wirelessly. No headphone jack.

Bottomline: The OnePlus 6T offers top-tier features at mid-tier prices. It is a great option for businesses with smaller budgets.

Who is the manufacturer of the OnePlus 6T?

What is special about the OnePlus 6T?

The smartphone has one of the fastest in-display fingerprint sensors. And, OnePlus claims half an hour is all you need to charge the phone.

Is it worth buying the OnePlus 6T now?

Yes. The phone offers great features, design, and functionality at an inexpensive price. If you don't need water resistance and wireless charging, it is a good option.

Will the OnePlus 6T be discontinued?

Is OnePlus 6T better than OnePlus 7?

While the OnePlus 6T offers high-end features and functionality at a lower price, the OnePlus 7 Pro is a better phone. It offers a better screen, newer unlocking technology, a bigger battery, and increased processing power.

Does OnePlus 6T have wireless charging?

No, but OnePlus has reportedly said work is being done on a new line of smartphones that will support 5G.

How long does the OnePlus 6T battery last?

Some tests place the OnePlus 6T's battery life at around 9 hours, but there have been reports of it being as low as 4 hours.

Does OnePlus 6T have dual speakers?

No. It has a bottom-facing speaker.

Does the OnePlus 6T have a microSD slot?

No, the OnePlus 6T has a dual nano-SIM slot.

What carriers does OnePlus 6T work on?

Does OnePlus 6T have an audio jack?

There is no audio jack on a OnePlus 6T.

Yes. OnePlus says on the website the battery needs only half an hour to charge enough to unplug and go.

Does OnePlus 6T work in USA?

Yes. It supports a broad range of bands used in the U.S.

Does OnePlus 6T come with a screen protector?

Yes, it comes with one screen protector pre-applied.